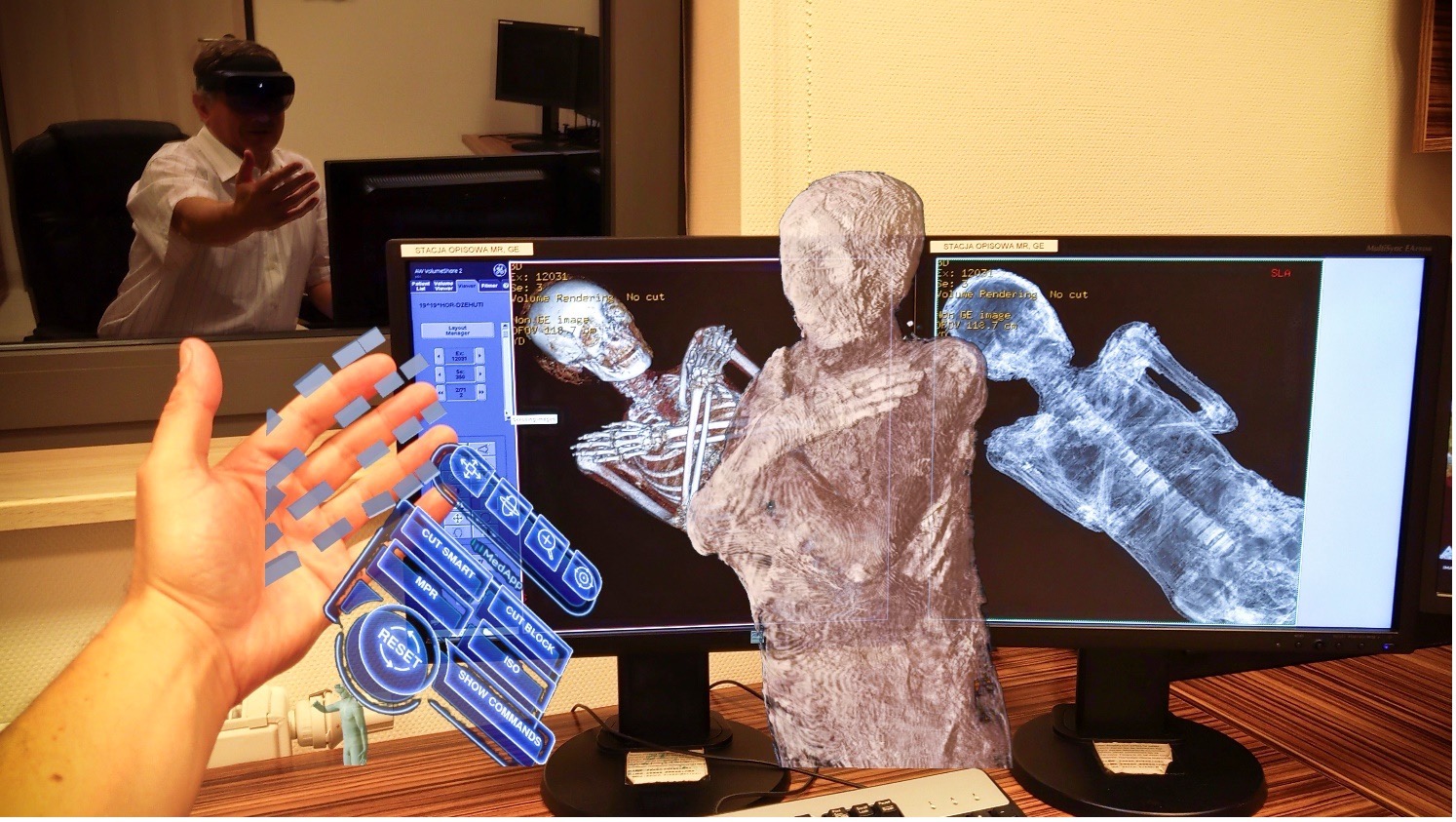 A Tale from the Crypt, Part 2: A Pregnant Mom? Not so fast!

It was around 2 a.m. one night around early December 2018, and the last day of the anthropological analysis, when Marzena Ożarek-Szilke looked at x-ray images of a mummy believed to be a priest and makes an astonishing discovery. : The belly of the mummy seemed to contain a fetus.

Ożarek-Szilke is an anthropologist, archaeologist and co-director of the Warsaw Mummy Project (WMP), a team of archaeologists who examine in depth a collection of Egyptian mummies at the National Museum in Warsaw. She was using GE Healthcare’s RTG mobile X-ray machine to take further measurements of the pelvis and bones of the “male priest” mummy when, she recalls, she saw “something light” on a CT scan.

“I was very tired and thought it was impossible for me to look at a pregnant mom,” she says. “I asked my Egyptologist husband to come and see. He also saw the fetus, and later we identified a skull and other body parts.

When the apparently pregnant mummy first arrived in Warsaw in 1826, the inscription on the coffin bore the name of a male priest. Although there have been previous X-ray examinations over the years, the use of precise X-ray equipment for non-invasive imaging has allowed the team to gain a more complex insight into the interior. of the body and discover the visual abnormality.

Using computed tomography (CT) and portable imaging technology from GE Healthcare, they were able to improve visualization of the torso and internal organs – which had been separately mummified, bandaged and placed back into the body – by approaching the mummy under different angles, without having to move the fragile artifact. Previous imaging was often distorted, but GE Healthcare’s software compensated by providing a series of real-time scans that could be stacked, producing a single panoramic image.

The excitement of the team was great – they seemed to have discovered the first known case of a preserved pregnant mummy.

Ancient Egyptians were known to gut bodies during mummification and either bury internal organs in jars near the mummy or put them back on the body. The question is: what did they do when a woman died in pregnancy? The team published their discovery of the fetus, with all its great implications, in April 2021 in the Journal of Archaeological Sciences.

But maybe they needed to take a second look.

After the publication of the initial article, many doubts were raised around the world on the presence of a fetus in the mummy. Thus, a new team was formed within WMP, led by its co-director, Kamila Braulińska, from the University of Warsaw. Using the same X-ray and CT scan data and employing the same equipment and software to obtain high-quality images of the internal structure of the mummy, they did a careful reanalysis and published their findings in of july CamberEological and anthropological sciences.

A key difference between the two surveys: this time, a diagnostic imaging professional was consulted. Radiologist Łukasz Kownacki, an experienced user of diagnostic imaging modalities and image post-processing methods, has used the sophisticated image processing algorithms available on GE Healthcare workstations for nearly 20 years – since the very beginning of his residency in radiology at the 2nd Department of Radiology at the Medical University of Warsaw in 2003. Today he heads the 2nd Department of Diagnostic Imaging at the European Health Center Otwock in Poland.

The other co-authors, Dorota Ignatowicz-Woźniakowska and Maria Kurpik, are experienced National Museum restorers. They oversaw the digitization of the mummy and the preparation of the new article and also provided valuable input regarding respect for human remains studied and exhibited in museums.

Braulińska wrote that what the first team interpreted as a fetus was actually three “bundles”, which often contained organs or were placed in mummies by former embalmers to maintain the shape of the body after the mummification process.

Evidence of this technique has already been seen in human remains. Using findings on radiological density, newly interpreted mass internal arrangement, and material characteristics – in conjunction with a review of archaeological literature on Egyptian mummies and fetuses – the researchers determined that the purported fetus was in fact poor radiological interpretation of these. bundles.

The new idea explains the absence of visible fetal bones in the pelvic contents. The document also points to other inaccuracies and claims in the initial “finding” that contradict each other.

Despite the disappointment that “pregnancy” is something else entirely, and what it says about the lack of cooperation between specialties in the study of Egyptian mummies, there is reason to be excited about the future of such a imagery. “I’m sure the whole team of archaeologists learned a lot from this interesting case,” says Kownacki. “I’m very happy to watch their skills progress in post-processing the CT data I created.” He also encourages his colleagues to support the archaeological community whenever possible through their access to high-end imaging equipment and 3D data reconstruction capabilities available in all hospitals.

Kownacki, who developed the high-resolution CT method and personally performed the CT imaging of the famous mummy, says: “We have shown how much the analysis of 3D effects and their interpretation depend on the skills of the software user, which can achieve excellent results. visualization effects without being a radiologist, archaeologist Kamila Braulińska being the best example.

The tools available to researchers today are highly advanced, useful and usable, paving the way for new discoveries in the field. The art is in the analysis.

An art with a long history

Such imaging technology is now helping to unravel the mysteries of the past; however, there is a long history of X-rays used on mummies. In 1896, Walter König was the first to do so, just months after German scientist Wilhelm Conrad Röntgen discovered the technology.

“In the first tests of X-ray machines, you had to spend a few hours in the machine to get images. It was too long [for living subjects to stay still]so mummies were an ideal use case,” says Wojciech Ejsmond, co-director of the Warsaw Mummy Project and expert in ancient Egyptian archeology.

The researchers say the non-invasive digital techniques give them a never-before-seen look at the past.

“Sometimes mummies are wonderfully preserved. You can recognize the faces, the nails are often well preserved, the hairstyle – it’s basically a time capsule,” says Ejsmond. “Although we have to remember that some of the internal organs were removed, other things, including the heart, remained as they were.”

Since the Warsaw Mummy Project started in 2015, the team has used both CT scans and X-rays to examine mummies at the museum. The two technologies are complementary and reveal different information about the mummy, including everything from the person’s age and health to their childhood nutrition, facial features and clues about the society they lived in.

For example, CT scans can show the amulets, charms, and ornaments with which the dead were buried, which can help researchers date a mummy and determine the area where the person lived. X-rays can show Growth arrest lines on the bones, also called Harris lines, which can indicate periods of poor nutrition or childhood trauma.

The technology can also help detect whether a mummy might be an archaeological fake. In one case, Ożarek-Szilke examined a mummy in the National Museum that was initially believed to be a 19th-century fake, but appeared to be a genuine Ancient Egyptian artifact embellished in the 19th century.

“In this mummy, the X-ray image was better than a CT scan,” she says. “When I examined the contents, there were human bones and ancient Egyptian amulets that proved it was not a fake. It was just a very unusual kind of mummy. Previous researchers who examined mummies similar called them fake.

Braulinska also uses X-rays and CT scans to study animal mummies, often discovered alongside humans. She has seen many cases of mummies that appear to hide a single animal but turn out to contain several.

The technology even serves a practical purpose, since researchers no longer have to move the delicate mummies and risk breaking them.

“It was very convenient for us, because the mummies are in different rooms. Instead of bringing mummies to gear, we could bring gear to mummies,” says Ejsmond. “It is very important, because every movement is dangerous for the structure of the mummy.”

The new technology helps archaeologists in their research process – another new technique involves fusing radiological images with the latest advances in holographic imaging.

Future steps to unlock the past

The first phase of the Warsaw mummy project, involving radiological examination and analysis of X-rays and CT scans, is now complete. However, the analysis of the material obtained continues. Going forward, the researchers say they have big plans to work in conjunction with GE Healthcare, leveraging its technology, to learn more about the mummies, such as the types of viruses they may have suffered from in the past. during their lifetime, and create 3D prints of their bones and amulets.

“We would also like to take micro-samples of mummies from inside and outside to date the mummies and learn more about their health and living conditions. We can take blood samples, but we have to work on the methods of such research,” says Ożarek-Szilke. “This is just the beginning.”

Braulińska and her colleagues are very proud of how the Warsaw Mummy Project, which they started only a few years ago in Poland, has caught the world’s attention and how interesting archaeological research can be. when combined with developments in diagnostic imaging. “It’s great to see how open GE Healthcare is to support our project, although it can sometimes be difficult to keep up with evolving theories,” says Braulińska.

This article originally appeared on Insights, the newsroom of GE Healthcare.

15 biggest defense contractors in the world in 2022

Best smartwatches list: What to look for when buying a smartwatch and our top picks | Reviewed by Trevor Long