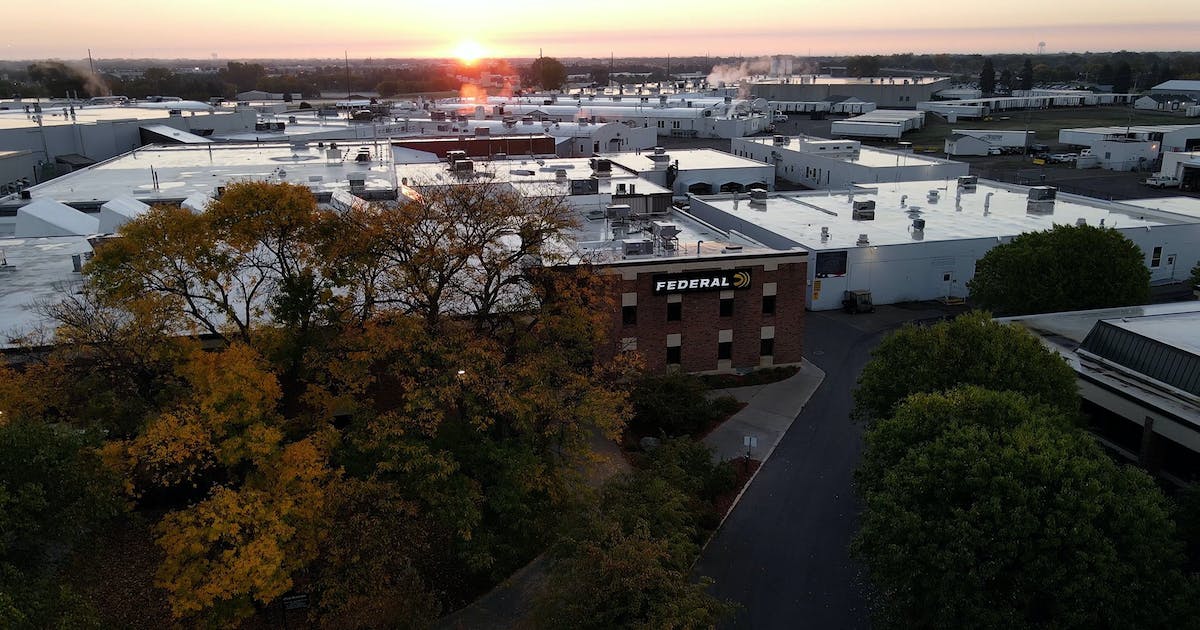 Anderson: At 100, Federal looks ahead while producing munitions

Now one of seven brands of ammunition or ammunition components owned by Anoka’s parent company Vista Outdoor, the Federal plant operates 24/7 and produces ammunition for hunters, forces law enforcement and governments around the world.

Founded in 1922 by Charles L. Horn, Federal, which employs about a quarter of Vista’s 6,000 employees, enjoyed an innovative and ultimately successful first century.

Horn first distributed Federal’s ammunition to barber shops, gas stations, and grocery stores, and by 1930 Federal’s strength had grown to 500.

The company’s production increased exponentially with the start of World War II. In 1941, Federal was contracted by the US government to build and operate the Twin City Ordnance plant in New Brighton. When the factory closed in 1945 (before reopening during the Korean and Vietnam wars), it had produced 5 billion rounds for World War II, far exceeding the million originally requested.

In 1951, Federal began producing primers for reloaders, and in 1960 was the first ammunition manufacturer to color-code firing cartridges by caliber. In 1973, Federal was the first company to produce steel shot shells.

Vista Ammunition’s president is 42-year-old Jason Vanderbrink. A Michigan native and longtime hunter, Vanderbrink joined Federal in sales 17 years ago and has been president since 2017.

Vanderbrink recently appeared on YouTube in an attempt to dispel rumors and “conspiracy theories” about ammo shortages that have plagued hunters, target shooters and reloaders.

In the interview below, Vanderbrink addresses this issue among others.

Q In addition to Federal ammunition at Anoka, Vista ammunition and ammunition component brands include Alliant Powder, CCI, Estate, Remington, Speer, and Hevi-Shot. What is the hunter and target shooter customer base of these companies, compared to other customer bases such as military and law enforcement?

A We don’t break this down publicly. I will say that the shooting and hunting segments have increased significantly.

A High school trapshooting has grown tremendously. We have supported it nationally for 15 years and we have a person who looks after the schools to make sure they have access to ammunition. We allow teams of young shooters to order ammunition twice a year. It can be a team from Minnesota, Utah, Florida or any other state. We limit the quantity that each team can order. The trainer has to place the order and of course it has to be verified. But the last thing we want is for these students to be unable to find ammo. Whether it’s hunting, hiking, backpacking or otherwise, we believe it’s extremely important to get the kids outside. To enjoy the outdoors. We also support 4-H and other youth programs. We have one employee and that’s all he does. Sometimes we give ammunition for their retreats. Sometimes we donate money to their national organizations. We strive to donate to programs that support filming and conservation.

Q Ammunition has been hard to come by in recent years. Why?

A It was a perfect storm. Social unrest has led to increased sales of firearms and ammunition for personal protection. Then shooting sports began to develop. And during the pandemic, we’ve seen hunting license sales pick up. The demand side of the business has been very difficult. In response, our manufacturing plants are operating seven days a week.

A Remington ammunition is heavily focused on the recreational shooting and hunting markets. He had run into financial difficulties and we were able to purchase his ammunition brands and manufacturing plant. Hevi-Shot, on the other hand, is a premium brand that offers non-toxic ammunition. Its acquisition immediately expanded our product line in this category.

Q Do Remington products overlap those of Federal? Are they distributed differently across the national territory?

A Some categories overlap and others are complementary. Remington, founded in 1816, is a much older brand than Federal, of course. There are pockets all over the country where some brands are stronger than others, but both are sold in all 50 states.

Q Non-toxic ammunition is on the minds of some lawmakers and others who argue that lead ammunition should be phased out. What is Vista’s position on such proposals?

A Our job is to give consumers as many choices as possible. We don’t make the laws. We are aware of non-toxic initiatives, particularly in California. The big picture is that non-toxic ammunition is considerably more expensive than lead to manufacture. As a company, we want to keep prices competitive so that our ammunition can continue to be purchased by people who want it. We don’t want to see demand go down. By law, we pay an 11% federal excise tax every time we ship munitions, and those millions of dollars are returned to the states to support conservation. If our sales go down because our prices go up, conservation loses out. As I said, our job is not to speculate on what the government might do, but to serve our customers. I will say that it would be a monumental task to go entirely non-toxic, and ultimately it would hurt conservation.

Q Given the amount of ammunition Federal and other Vista brands produce for firearms ranging from handguns to muzzleloaders, your supply chain’s demand for plastics, brass, steel, powder, lead and other components must be difficult.

A Our supplies come from all over the world. But the lead we use at Federal in Anoka comes almost entirely from Minnesota from recycled car batteries. But you are right. Like many businesses right now, for a variety of reasons, our supply chains are under stress.

Q Aside from toxicity and non-toxicity considerations, do you see cartridges changing significantly in the future? So much progress has been made in hulls, wads and, in part, muzzle velocity. It would seem that few improvements remain to be made.

A All ammunition has changed a lot over the past 20 years. But we are always looking for ways to improve performance. We strive to be the leader in innovation, and I believe you will continue to see improvements over the next 20 years. It could be propellant, wad, shot, anything. We have engineers in different disciplines. Some are chemical engineers, others mechanics. What they all have in common is their love of the outdoors, hunting and shooting sports. They are constantly looking to improve our ammunition.