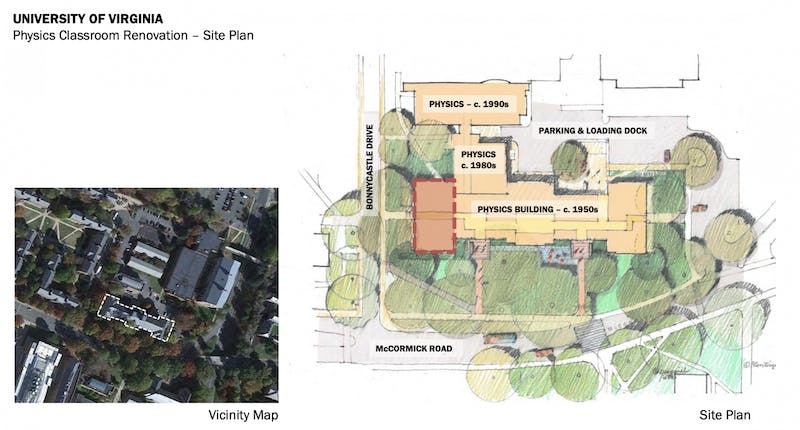 The Council of Visitors’ Buildings and Grounds Committee voted to demolish the University’s Garden Apartments and reviewed proposed designs for the new Physics Building, among other agenda items, at its meeting of Thursday.

Chairman Robert Hardie opened the meeting by reminding committee members of their responsibility and privilege to make decisions regarding the grounds.

“We are blessed with what many consider to be the finest university grounds and architecture in the country – it is our responsibility to be good stewards,” Hardie said.

Among the items on the agenda for this meeting was the review and approval of the schematic design for the Physics Building Classroom Renovation, a $7 million project to promote learning active and adding windows to the west end of the building to provide natural light.

The design team, led by Goody Clancy Architects, also plans to construct a new ceiling-to-floor structure – complete with equipment and furnishings – between the building’s second and third levels. The schematic plan includes a classroom for 135 students on the second floor, and a hybrid auditorium and classroom support space on the third floor.

The committee also voted to approve the Darden School of Business Master Plan, which aims to improve the academic experience for students by creating an academic ‘hub’, increasing green space and improving connectivity between North Grounds and Central. Grounds.

University architect Alice Raucher pointed out that due to the large number of components of the master plan, approval does not necessarily mean approval of a specific project.

“It’s not an endorsement for any particular project,” Raucher said. “It would either come back for project approval, or conceptual site design guidelines, or both for approval before a project could move forward.”

The plan was first conceptualized in 2016 with Robert AM Stern Architects to “maximize strategic facility growth on the Darden grounds” and was refreshed in 2021.

“We think we can do things quite economically and that will make us more competitive, providing the office space we need and, most importantly, providing a great academic experience,” Beardsley said.

Another item that the Committee approved was the demolition of University Garden Apartments, which are located across from the John Paul Jones Arena. The apartments were built in 1948 and served from the 1960s to 2019 as housing for married and graduate students. According to the report, high operating costs mean apartments are generally not worth maintaining.

Colette Sheehy, senior vice president of operations and state government relations, said the buildings are no longer suitable for use.

“It would be really cost prohibitive to make them habitable again – mechanical electrical plumbing systems are no good. The roofs are not good, [and] they are not centrally air-conditioned,” Sheehy said. “The site itself is probably more valuable to the University without the buildings on it because of where it is.”

Council also voted to approve the addition of a new project to the Major Capital Plan. The proposed project would improve educational programs for U.Va. NOVA – the university campus in Northern Virginia – leasing and renovating space at the Inova Center for the Personalized Health Campus in Fairfax. The building to be used originally belonged to Exxon Mobil before being acquired by INOVA and is not attached to the INOVA hospital. The proposed $20.6 million project would create classrooms, offices, and provide furniture and equipment for the campus.

The committee then heard two reports from Sheehy, one reviewing the committee’s sustainability goals and achievements, and the other discussing efforts to implement the capital program recommendations presented by HKA Global at the 2021 board meeting.

The report created by HKA Global revealed that the University’s spending on capital projects is in line with that of other institutions. The report’s recommendations include goals to intensify the budget development process to better take into account risk management, to prepare regular reports on the progress of projects and to develop a project to ensure an understanding of future plans and budgets.

The Buildings and Grounds Committee will meet again at the December Board meeting.

Here’s what we love about the MINI Aceman