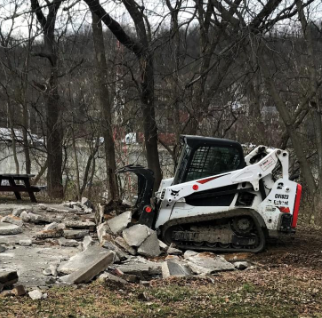 Construction of a neighborhood dog park on the west side of Covington is underway.

A Bobcat and dump truck operated by public works crews began removing pavement and short dividing walls from an existing playground at Ninth and Philadelphia streets. The demolition is the first physical work on what will become a 1½ acre site that dogs can officially roam on.

“I’m really excited, in fact, probably ecstatic,” he said. “It’s been talked about for the past decade, and we’re finally on our way. There will be many happy dogs and dog owners.

Eventually, the city hopes to build more neighborhood dog parks east of town and in South Covington, he said.

The city will soon issue a request for proposals for about $100,000 in fencing at the west side site, he said. In total, the park’s equipment and installation will cost more than $125,000.

Funding comes from federal sources and a $10,000 donation from the Northern Kentucky Association of Realtors. Brandstetter Carroll Inc. did the design.

Oldiges said the city hopes the dog park will be up and running by late spring with a grand opening ceremony to be held around that time.

The park will include high-end decorative fencing, separate areas for small and large dogs, water fountains (for dogs and their owners), benches, shaded areas and a perimeter path.

The location was the second most popular site mentioned by dog ​​owners in a survey and during public engagement sessions last year, Oldiges said.

Health concerns have ruled out the most popular site, the land in the shadow of the Interstate 75 wall. This area serves as a stormwater retention pond and is covered with rainwater containing partially treated sewage. several times a year during torrential storms.

The dog park will be named after Army Sgt. 1st Class Jason Bishop, the 1993 Holmes High School graduate who was killed by a bomb in 2006 while serving in Iraq with the 101st Airborne Division. Bishop’s name already adorns the playground on the site, which is adjacent to Kenny Shields Park.