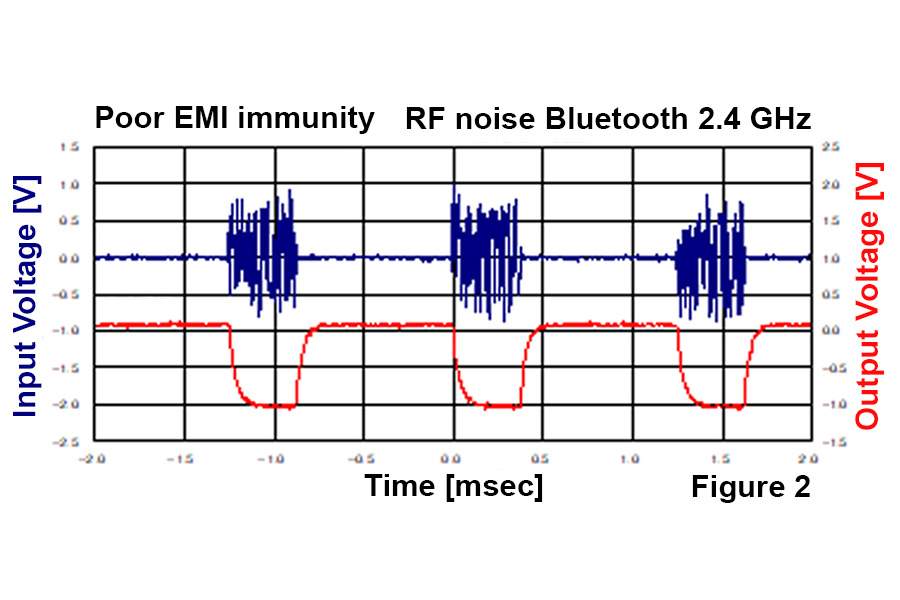 [Partner Content] We are exposed to EMI everywhere, it is unavoidable, but what is the effect on op-amps and what can you do to avoid it? In this article, we explain why it is important to use operational amplifiers with a high EMIRR. Read all about it!

Operational amplifiers are very popular and often used in a variety of applications, for example to amplify a weak signal from an IoT sensor, and to collect and transmit its data via wireless communication. In relation to this article, we just like to point out the effect of electromagnetic interference (EMI) on the operation of op-amps, which is almost unavoidable, as we are exposed everywhere to a range of sources which are on the one hand intentional , such as mobile phones, radio transmitters, Wi-Fi, Bluetooth, remote controls. But on the other hand, also unintended ones like system clocks, oscillators, processors, switching regulators to name a few.


How to observe the impact of NDEs?

The most common effect is an output voltage shift; AC interference is somehow rectified by internal PN junctions and filtered by the circuit, finally it appears as an amplified output voltage offset corrupting analog measurements and/or digital data. EMI can appear on any terminal, including inputs, outputs, power, and control lines. However, in general, it is assumed that the input terminal is the most vulnerable to EMI influence compared to the other terminals. The amount of offset voltage fluctuates with the strength of the EMI interference. Figure 2 shows the details of the effect of a Bluetooth RF burst causing a significant offset voltage shift in a traditional op-amp circuit.

In many modern operational amplifiers, measures against EMI are taken, a new term has been introduced in the list of parameters, called the Electromagnetic Interference Rejection Ratio or EMIRR in short and indicates the level of immunity to interference. The higher the EMIRR value, the lower the offset voltage offset. Refer to Figure 3 and note that this op-amp has high immunity for the RF burst, almost no visible evidence of an offset voltage shift on the op-amp output.

When designing an application, it is important to select the correct op-amp if a significant source of EMI is expected near the sensitive inputs of the op-amp. Figure 4 shows the NJU77552 with solid EMIRR in the gigahertz range compared to op-amps from other brands. It is obvious that the NJU77552 filters out the interference from the 2.4GHz Bluetooth radio smoothly while the other product has problems in the output signal.

Learn more about EMIRR and other op-amp features on our website.

Op-amps are one of the main selling products of Nisshinbo Micro Devices and are ranked among the top 5 global manufacturers of such devices. Its range offers a variety of features for almost all requirements:
Nisshinbo Micro Devices is a new brand of electronic devices and microwave products, but in fact it has more than 60 years of expertise and has often pioneered the development of new semiconductor products. Since January 1, 2022, New Japan Radio and Ricoh Electronic Devices joined forces to create Nisshinbo Micro Devices. A comprehensive portfolio is available for the consumer, industrial and automotive markets with analog components such as: