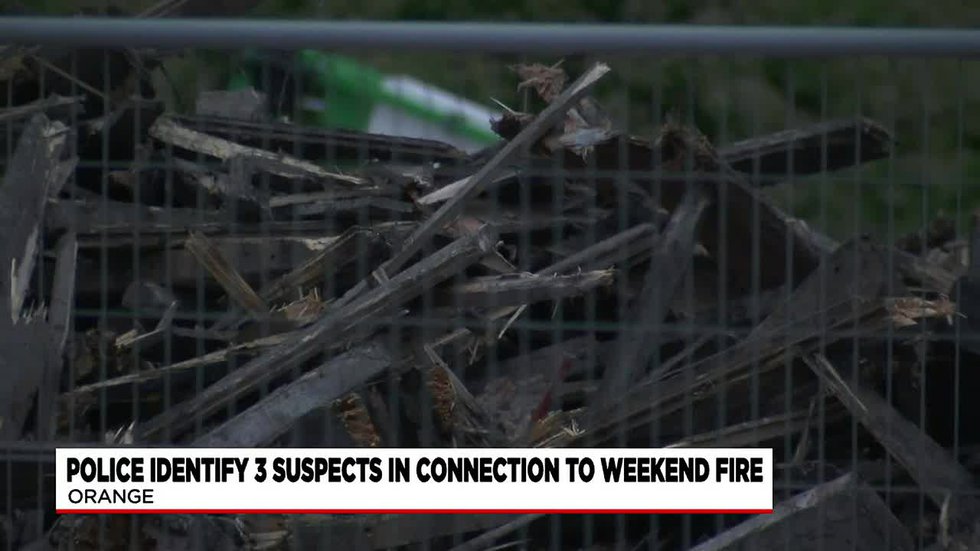 Police have identified three suspects they believe are linked to the fire, and all are under the age of 15.

Orange’s police chief told us that they had received information from the public and obtained a great deal of information through an ongoing investigation by local and state authorities.

Officials have identified three youths between the ages of 12 and 14. We spoke with a woman who lives just behind where the fire started, and she said she actually knows the suspects.

“It was pretty scary. It was,” Michelle of Orange said.

A pile of rubble remains after a long-abandoned grain factory was engulfed in flames on Saturday.

Thick smoke billowed in the air for hours, the flames eventually spreading to three other buildings. Officials told us more than 20 fire departments responded to mutual aid, working through the night to extinguish the blaze at five alarms.

Michelle lives behind the building and called 911 when she first walked outside and saw the fire.

“I just stood there and watched it, and it was intense,” she recalled.

Michelle told us she was worried that some debris would fly up and hit her house.

“Police and firefighters actually came to my house and said, ‘You might want to make a plan because you might have to evacuate,'” she said.

She told us she lost power for about six hours and then went offline for a few hours after that. Due to the massive response, she was unable to leave her street.

“I literally had to drive around the next town just to get to Main Street,” Michelle said.

She added that the city is devastated by the loss of this historic building where scenes from the Stephen King-inspired Hulu series Castle Rock were filmed.

“It’s such a huge void,” Michelle said. “I grew up here, you know, my whole life, and just passing by earlier and gassing up for work, I looked and just…it’s different, you know. It’s totally different.

Orange police announced on Tuesday that three minors between the ages of 12 and 14 face criminal charges in connection with the fire. Michelle told us she knew the suspects and that one of them was her daughter’s best friend.

“She was like, ‘Mom, I think my friend did this,'” Michelle told us. “I said, ‘Penny,’ my daughter’s name is Penny, ‘You can’t just point fingers. This is serious. This is not okay,’ and she said, ‘No, he actually tried to break into this building a few nights ago and couldn’t get in because it was too dark and he mentioned he wanted to get into the building and start a fire.'”

Orange Police Chief James Sullivan and the state fire marshal’s office said it’s important for parents to have a conversation with their children and explain the dangers of the fire, saying juvenile burning is a serious problem that contributes to dozens of fires each year in Massachusetts. .

Michelle said she was surprised they did something like this and hopes it’s not something that will stick with them forever.

“I don’t think being that young they understood the seriousness of what was about to happen,” she said. “I hope they’re held accountable, but lenient, because that particular kid who knows my daughter and stays with me is a great kid. You know what I mean? Like, big heart, such a good boy , and I would hate to see that completely ruin his life.

All three suspects are to appear in Greenfield Juvenile Court. They face arson charges. An arraignment date has not yet been set.

The role of salespeople in 2022