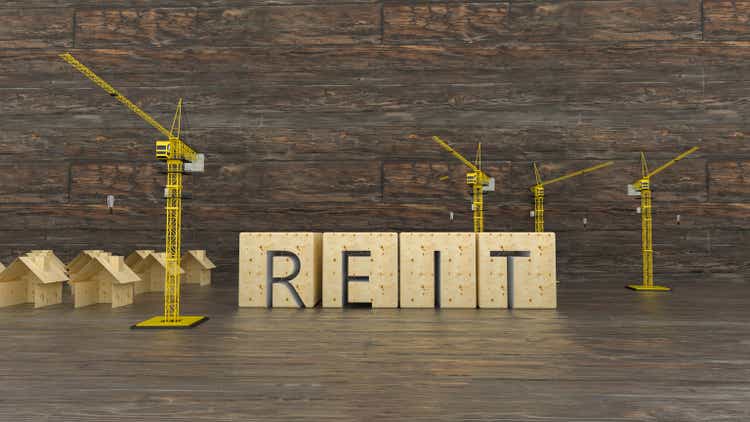 With lower real incomes and higher mortgage costs, the US housing market has started to show the first signs of weakness. In particular, the MBA Purchase Index reached its lowest level since 2004 (almost 200 p.). The decline in mortgage demand has pulled down new home construction, even though the index is at a local high. We recommend reducing the share of investments in developers and using available capital to invest in Residential Real Estate Investment Trusts (“REITs”). Our absolute favorite is Invitation Homes Inc. (New York stock market :NYSE: INVH) due to its extensive investment program, which will help fill the rental housing deficit in the United States

The first signs of weakness in the real estate market

Real household income continues to decline for the second consecutive quarter due to slowing economic activity and accelerating inflation across the country. Thus, according to FRED, at the end of 2Q 2022, real disposable income (income after tax) fell by 4.2% y/y.

In the wake of lower incomes, consumers are becoming cautious about buying durable goods due to the recession expected in 4Q 2022-1Q 2023 in the United States. Thus, according to Investing, the growth rate of durable goods orders amounted to zero on a monthly basis against expectations of a rise of 0.6% m/m.

Residential housing is no exception. The first weakness is demonstrated by the mortgage market. According to Investing, the mortgage index approached the level of 200 points, which is the lowest value since the drop caused by the COVID-19 pandemic.

As we have already reported, the mortgage market is cooling following higher rates. Typically, 30-year mortgage rates track 10-year bond yields in the United States, according to FRED, because the average life of mortgages can reach 10 years (consumers pay off the mortgage or refinance it at a lower interest rate). The average spread is around 150 bp and extends up to 250 bp in times of crisis.

It should be noted that according to the futures curve, the average US Fed rate through 2025 is expected to be around 3.4%, and the “spread” between the Fed rate and mortgage rates at 30 years, according to FRED, is 250 bps outside of crisis periods and approaches almost zero in the face of recession. In other words, US 10-year bond yields will remain at 3% for a long time. The average mortgage rate is expected to exceed 6% as early as the second half of 2023. Sales of mortgage bonds aimed at reducing the Fed’s balance sheet are also having an impact on the rise in yields.

Betting on REITs is more attractive

According to Bloomberg, in May the average payment reached the average rental rate. Buying real estate used to be more profitable due to low rates, but those days are over.

Despite the increase in housing stock, it remains below 1 million units, which will support prices. Combined with rising rates and face value of properties, the average mortgage payment is expected to increase further.

Households resorted to rental real estate due to the inaccessibility of housing. According to FRED, in 2Q 2022, the average rental vacancy rate reached its lowest level in 30 years.

Higher rental rates are now supported by strong demand, and then high house prices in 2021 will kick in. Typically, rental rates react to property value with a 12-18 month lag, according to FED Dallas. In other words, we think the bet on residential REITs is reasonable, as we expect the US housing market to come under pressure over the medium term.

REITs during the recession

REITs are expected to perform poorly during periods of tight monetary policy, as the attractiveness of the dividend yield is reduced due to higher risk-free rates. However, according to Nareit, REITs generally increase rental rates faster in times of high inflation, supporting the growth rate of FFOs. Despite commonly accepted dogma, according to Nareit, REITs have shown a positive return in 85% of observations during periods of rising rates.

The recession hit the dynamics of rental rates the hardest for office real estate, the least hard – for residential real estate. For example, according to SparrowHawk, during the 2008 crisis, rental housing payments fell to 5% year-on-year but recovered faster than the market.

Based on the new assumptions, we maintain our BUY stock rating. The target price is $52. Up – 33%. Our valuation of the company is based on EV/EBITDAre and EV/FFO.

Invitation Homes Inc. is one of the more attractive REITs, with an extensive investment program that sets it apart from the closest competitors. Right now, rental real estate investment funds are all the rage due to the high demand for rental housing due to exorbitant new housing prices.

Key factors driving stock growth over the next 12 months:

The U.S. housing market is off the news as demand for real estate declines across the country amid accelerating mortgage rates and falling household incomes. We believe that betting on the real estate market through REITs remains relevant due to the ever-increasing demand for rental accommodation caused by the inaccessibility of owned units and the shortage of vacant rental units.

We also think INVH shares are attractive to buy now due to rising prices and the current value of the property included in future rental rates. We recommend keeping an eye on statistical data (FRED, Zillow and Redfin).

After a year in a new location, Good Life Center affiliates report success