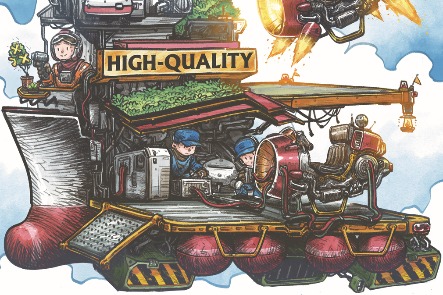 Look to the recent past for future GDP corrections

China posted GDP growth of 2.5% in the first half and growth of just 0.4% in the second quarter, which will likely be the weakest three-month performance this year. Although from June there were signs of recovery, indicating that growth in the second half could pick up significantly, it is best that we look again at the performance of the first half and look for the key structural factors behind such unexpected misfortunes such as Russia-Ukraine. conflicts and resurgences of COVID-19 across the country.

In addition, first-quarter GDP grew 1.3% quarter-on-quarter, slower than fourth quarter, reflecting pressure from the long-term sluggishness weighing on the Chinese economy outside of the Russia-Ukraine conflict and of the rise of COVID-19. And with the impact of COVID-19 in March, the situation deteriorated for China’s economic development and production data.

To meet the challenges posed by both long-term pressures and short-term setbacks, China has used counter-cyclical policy to stabilize growth, which is clearly reflected in infrastructure investment and has effectively started producing its effects. According to macroeconomic data from the first half of the year, there has been a significant rebound in the growth of infrastructure investment. However, growth in manufacturing investment fell from a high level and real estate investment continued its downward trend, dropping 5.4% over the period. In terms of fixed capital investment, state-controlled enterprises saw their investment increase by around 9.2%, but the private sector only increased by 3.5%, which is a natural result. because private investment is pro-cyclical.

To explain this phenomenon, we must know where the money comes from. This year, the will and intensity of stabilizing infrastructure growth has been stronger, but the outcome of policy measures has not changed. Local governments can only “do their best” within the limits of the existing system and financial resources. Moreover, the participation of private capital in infrastructure investments is decreasing due to the decline in investment returns.

In the first half, the increase in household deposits reached 10.3 trillion yuan ($1.53 trillion), up 2.9 trillion yuan year-on-year, indicating that household demand for risk coverage has increased and their willingness to invest decreased. Such a reaction partly affected total retail sales of consumer goods, which fell 0.7% during the period.

Therefore, in addition to efforts to contain the COVID-19 pandemic to ensure orderly development, we should pay close attention to non-COVID-19 factors weighing on the economy and pay attention to structural issues, such as employment, consumption and property risks. .

First, investments in infrastructure. Also hard hit by COVID-19, investment played a vital role in supporting the economy in 2020, followed by exports. And among investment in fixed assets that year, the growth rate of real estate investment was 7%, in stark contrast to the 5.4% drop in the first half of the year.

However, the share of investment in fixed assets in GDP started to decline after reaching 80% in 2016, and that of infrastructure investment started to do so after 2017, indicating a weaker driving force of the sector. Considering that there are also factors limiting the investment of public capital in infrastructure projects, the ripple effect of the sector on the economy in the second half of the year may not be strong. This is also the reason why the country is taking steps to redirect its development towards the cultivation of more efficient engines.

In fact, the increased distortion of the economic structure and the problems of fragmentation in the global economic system are common problems faced by countries around the world, including China. Therefore, the transformation must be continued by accelerating independent innovation and successfully shifting from old pillars of growth to new ones, so that even in the face of an economic downturn, there are still structural growth points and opportunities. that we can exploit.

Second, real estate. As we can see, the real estate sector needs the most attention this year.

Real estate investment is indeed a slow variable affected by the long-term real estate cycle. And the cycle is in turn affected by factors such as long-term urbanization trends and demographic cycles. For example, the process of urbanization in China has slowed down, but the process of mega-urbanization continues to accelerate, which is manifested in a sharp decrease in the permanent population of most small towns in the country. Meanwhile, major cities like Shanghai, Guangzhou, and Shenzhen in Guangdong Province and Hangzhou in Zhejiang Province are still earning more.

But at the same time, the aging of the population is also showing a rapid upward trend. From this year, the number of pensioners will begin to increase more rapidly. That is to say, the urban rate in China will not be as high as in Western countries, because the aging of the population will lead to a decline in mobility. Ultimately, real estate, as the main pillar of the Chinese economy, will gradually diminish its role in promoting the economy.

As the data for the first half of the year shows, the real estate sales area recorded by the top 100 real estate companies, as well as that of the top 5, recorded negative growth. Only 30 large and medium-sized cities experienced a rebound in retail space in June. With sales in first- and second-tier cities accounting for about a third of the national total, it is still difficult to reverse the downward trend in housing in the second half.

In conclusion, the recovery of the real estate market will be slower than expected, and this deserves all the attention it deserves. The real estate slowdown is the biggest potential macroeconomic challenge this year, but the commercial and residential real estate segments are far from fully prepared for such a situation. Therefore, the most important thing at present is to maintain risk control and avoid systemic financial risks caused by frequent default events, as well as the spread of local financial risks.

Last but not least is consumption. Affected by COVID-19 resurgences, household per capita disposable income nationwide in the first half of the year rose 4.7 percent in nominal terms from the same period a year earlier. After deducting price factors, the actual increase was only 3%. While consumption is closely linked to residential incomes, if the growth rate of these incomes increases, consumption may also increase accordingly. Since 2020, there have been declines in consumption growth, but with the COVID-19 situation expected to gradually ease, consumption is likely to rebound in the second half of the year.

China can take two directions in its search for answers to further improve its consumption and increase its contribution to the economy. On the one hand, the weakness of consumption results from high savings rates, including for pensions or for the purchase of housing. If concerns about these issues are addressed or supported by policies, more spending will be on consumption. Therefore, it is necessary to provide more public services and to offer more guarantees in terms of housing, pensions, education and medical care. The vouchers will also help boost residential consumption and entice people to open their wallets.

On the other hand, governments should come up with more ways to expand sources of income for low- and middle-income groups through tax reforms, financial subsidies or other means, not only because those incomes are the main drivers of consumption, but that these measures involving the promotion of common prosperity and the reduction of the income gap will also stimulate consumption.

Whether or not the GDP growth rate meets expectations, if inflation and unemployment are kept within a reasonable range and potential risks in real estate are well contained, the country will stay on track. Many say the government will introduce more aggressive stimulus policies in the second half to help the economy rebound strongly. But we don’t necessarily agree because China has emphasized better fiscal policy effectiveness and demanded quality and efficiency in fiscal spending to ensure the sustainability of fiscal support for economic development. Therefore, for this year and beyond, achieving robust economic growth from high-quality development should be the primary policy objective.

The author is chief economist at Zhongtai Securities. This article is based on an editorial by the author of the China Chief Economist Forum, a think tank.

Opinions do not necessarily reflect those of China Daily.