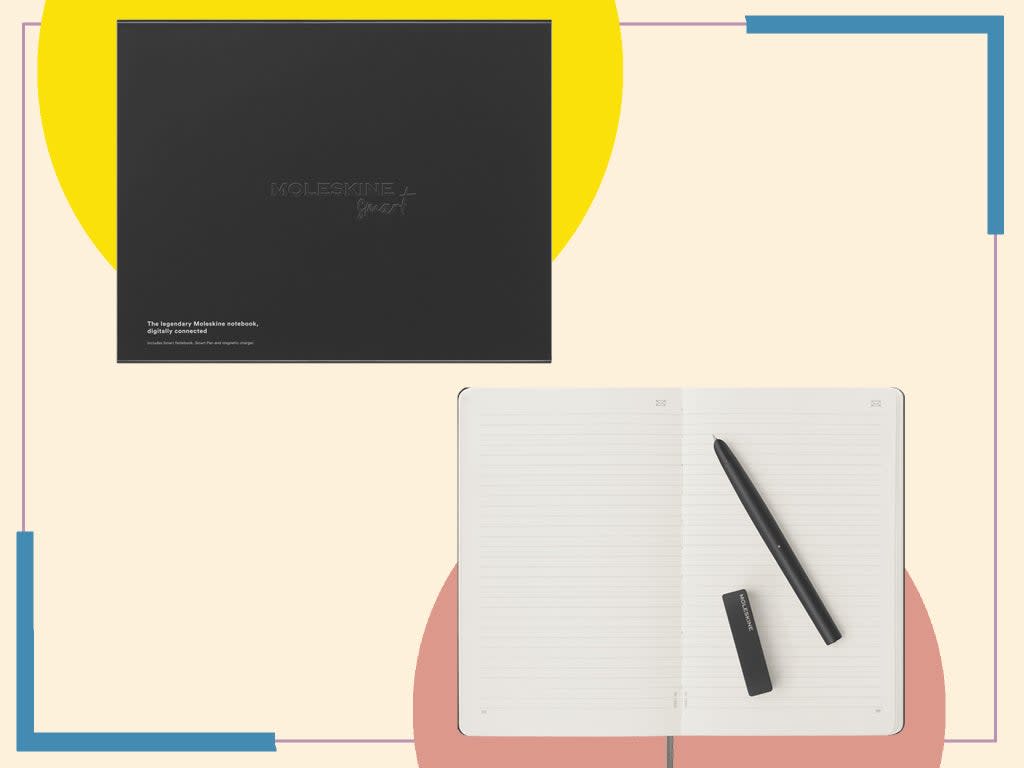 Moleskine’s smart writing kit makes digital copies of our analog notes – but has it converted us?

We all carry around a number of devices these days that allow us to store, access and edit documents remotely. Working on the go has never been easier. What if we told you that a new revolution is on the way?

Digital note taking allows all handwritten notes to be stored electronically. This then gives users the ability to recall, edit and organize notes right on their device without having to carry around a number of heavy pads, books or handfuls of paper.

The technology generally comes in two forms. First, there’s on-device notes, where apps like Good Notes let you write directly on the screen using an Apple Pencil or similar. Alternatively, there are products that come with a traditional notebook and pen that have Bluetooth connectivity to track your stylus movements on an app. That’s where the Moleskine Smart Writing Kit comes in.

It was designed for people who want to retain an element of the traditional, using real paper, but also need the flexibility to access their notes on the go, or export and email them. as PDF documents. There’s also a sense that eNotes can be better organized to suit your own needs and workflow.

But could digital note-taking really simplify our daily lives? Could transferring notes directly from page to page really be a game-changer? We discovered.

We’ve been using the Moleskine Smart Writing Kit as our main notebook for the past month. We used it for daily meetings, shopping lists and life administration, and used the app on both our Android device and an iPad. Would the whole thing make us a digital note-taker convert, or should we have saved our money? Keep reading to find out.

Right out of the box, the Moleskine Smart Writing Set is well-designed. It’s well packaged and comes in a sleek black box adorned with nice minimalistic elements, like the embossed Moleskine logo on the front.

Once inside, it’s the standard high-end Moleskine feel, with the main attraction being the classic rounded black elastic-closure book on which the brand has built its rather enviable reputation. But it is with the black ballpoint pen that you have to be very careful here.

Read more: Which Amazon eReader Should You Buy?

Contained in a separate box, at first it seems a little bulky on inspection, but close examination tells us it’s actually quite well designed and ergonomically well thought out. Holding it in the usual way feels a little foreign at first, but it didn’t put us off and we got used to it very quickly.

For a system that bills itself as a simple way to increase productivity and streamline your work processes, you’d expect easy setup, and luckily the Moleskine Smart Writing Kit didn’t disappoint on that front.

A word of warning – charge the stylus before using it, as we initially found some connectivity issues when the battery was low. With the pen charged, however, and the Moleskine Notes app downloaded from the App Store or Google Play Store, you’re pretty much ready to start writing.

In the main apps menu, you’ll find your notebooks, a notebox (which contains your locked and important documents), and a trash can where you can retrieve old pages if needed.

You don’t need to sign up for an account because Settings lets you connect your Google OneDrive accounts, and with Auto-Upload enabled, it’s even easier to access your written pages on the go. That being said, if you set up a Moleskine Smart Account, you get access to your notes in the cloud, easy backups, and a new subscription service that isn’t out yet but promises to open up more possibilities. and features.

The process of actually using the system doesn’t need much explanation – you can just use it like a normal pen and notepad, and the pen will automatically track your movements and make a digital copy that will be stored on the app. There are a few steps you need to go through before you start writing though, which can make the whole process a bit confusing and counter-intuitive…

We found that the app had to be opened and the pen connected manually before tracking any writing. And we also had some connectivity issues when we tried to write and had to turn everything back on after closing the app and disabling the stylus.

These are minor issues that we overcame very easily after a little investigation. But given that you can still use the stylus and notebook “traditionally”, without Bluetooth on and the app connected, we wonder if some people might end up not bothering to connect it at all.

That would be a shame, though, because with everything working well, the Moleskine Writing Kit does a pretty good job of copying it to the screen. For example, if you’ve often struggled to use Apple Pencil on an iPad, this might be the solution for you. Your own handwriting is rendered crisply and words are even transcribed into digital text for copying and pasting if desired. We’ve also found that the app does a pretty good job of interpreting even the scruffiest notes, so there’s no need to worry if your handwriting isn’t the neatest.

Pages are organized by last used or page number, and the app instinctively knows which page you’re writing on. So everything in the app is minimal, neat, and easy to follow.

If there comes a time when you forget to turn on the pen or the Bluetooth, you shouldn’t worry too much because it contains a small amount of memory to transfer your notes when you turned it back on. It’s a really neat little feature that’s been really helpful while we’re getting used to it.

Read more: These are the best cheap tablet deals this month

Another cool feature is the messaging logo at the top of every page. Just tap it with the stylus while connected and your device’s messaging app will automatically open with a PDF of the page you want to send. It’s extremely useful for sending important documents to yourself or others, and generally a really smart and thoughtful piece of design all around.

One thing that disappointed us a bit was that with heavy use, the pen’s battery drained quite quickly and required re-plugging into a USB device quite often. We didn’t mind too much, as it doesn’t take long to get back into it, but again, we think Moleskine could have done a little more here to remove barriers to work.

We’ve really enjoyed using the Moleskine Smart Writing Kit and, in fact, think it’s probably the best traditional/digital combination system on the market right now. It’s beautifully packaged and stays true to the brand’s premium values, with a few digital-specific niceties like automatic email and cloud download features that set it apart from the crowd.

It’s not entirely without flaws, and because the app is relatively new, we expect there to be patches, updates, and bug fixes in the pipeline making the device easier. to use, faster to connect and less prone to problems. The only other criticism we had was the price – it’s a lot of money, with additional smart pads around £20 each once you’ve filled in the original.

For the latest tablet discounts and other tech deals, try the links below:

What are you really paying for with audiophile equipment?