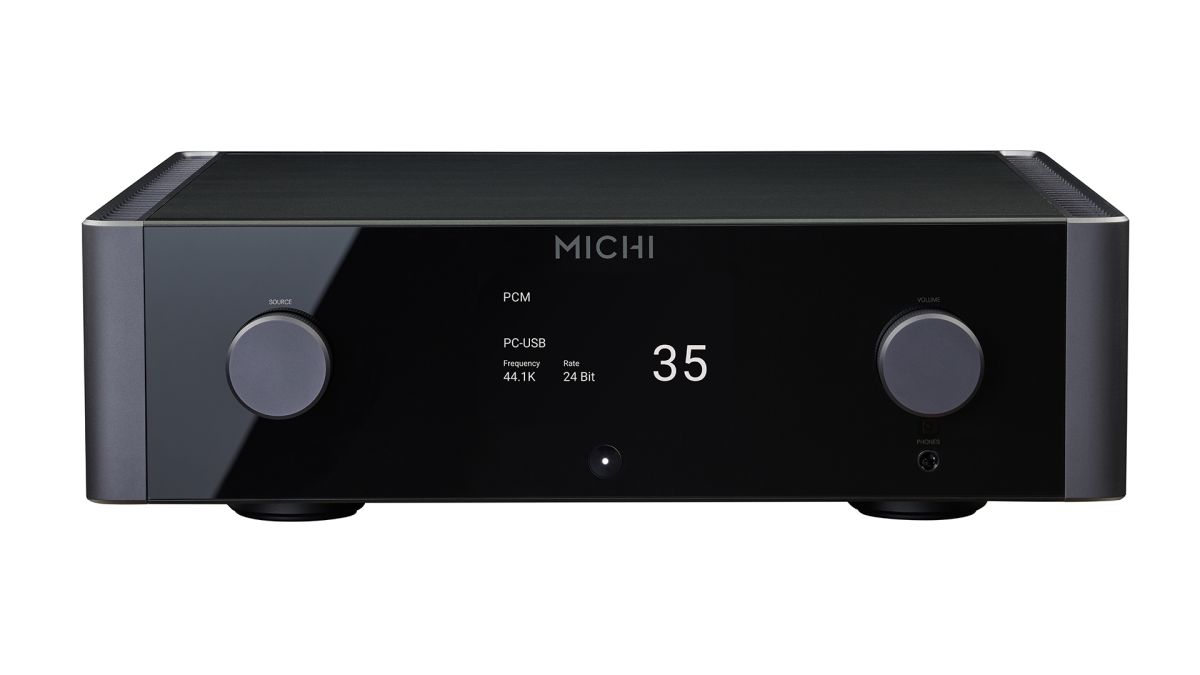 In the early 1990s, Rotel was best known as a producer of affordable, value-for-money hi-fi systems. Its budget amplifiers, CD players and, yes, even its turntables, were generally considered to be precursors, and rightly so. So the introduction of the high-end Michi sub-brand at this time was somewhat of a surprise, and extremely pleasing at that, given the exquisite build quality and remarkable sonic talents of this original range.

Reviews were rave reviews and a hi-fi legend was born, but remarkably these beautiful original products did not become a range of Rotel mainstays as one might expect. It wasn’t long before many of the engineering ideas from these Michi products found their way into Rotel’s more mainstream offerings to such an extent that the company didn’t feel the need to keep this flagship series.

But now Michi is back! It returns in a very different form, but the ethos of delivering sonic purity, exceptional construction and excellent value remains intact. The words “excellent value” and “high-end hi-fi” aren’t necessarily easy to reconcile, but judge this integrated amplifier against class standards and it’s hard to avoid the conclusion that the X3 delivers. a lot for the money.

It’s the baby integrated amp of a small range that includes a more premium monoblock, a preamp and the choice between a stereo power amp or a more powerful monoblock model. That’s it. At the moment, there is not even a source component, which is surprising, nor a pair of matching speakers, which is less so.

But when we call the X3 the baby of the range, that’s in no way detrimental to it. By most standards, this bulky amplifier is something of a beast. It has a claimed power output of 200 watts per channel into an 8 ohm load and rises steeply to 350 watts per side as halves of impedance.

In use, that means this built-in Michi can drive just about any price-compatible speaker at very high levels without issue. An abundant supply of grunt isn’t even half the story. This amp is also very well equipped.

We firmly believe that high-end integrated amps should be as convenient as possible. After all, what’s the point of having a monoblock amp if you need to add extra enclosures for digital-to-analog conversion, phono amplification, or headphones? We’re glad Rotel seems to be thinking along the same lines.

Key features are a digital module powered by AKM’s AK4495SEQ DAC chip. There’s a good choice of inputs with one USB (type B) and a trio of optical and coax available. USB accepts PCM signals up to 24bit/384kHz and DSD128. The other digital inputs are all rated at up to 24bit/192kHz, which should be more than enough for most people.

Don’t get too excited about the Ethernet jack as there’s no streaming module built into the X3. The Ethernet is purely there to allow this product to be integrated into a custom installation context. There are many trigger inputs and an RS232 port for the same reason. Rotel has taken care to make this product as accommodating as possible.

Switching to analogue we have three stereo RCA inputs as well as a balanced XLR option. There’s also a phono stage, although it’s perhaps a little surprising that Rotel engineers thought a moving-magnet-only design would suit this price point. You’ll have to upgrade to the more expensive Michi integrated amplifier, the X5, if you want an integrated moving coil circuit.

There’s the option of adding more muscle through the use of an external power amplifier, should the X3’s already sound output seem lacking, as well as a USB (Type A) for charging and charging purposes. software upgrades. Also on the front of the device is a traditional 6.3mm jack for headphones. Lack of moving coil phono stage aside, it seems Rotel has managed to cover most bases here.

Take a look inside and it’s hard not to be impressed. The standard of construction is unmatched at this price, and everything is arranged with obsessive attention to detail. It is obvious that the company takes great pride in the appearance of the interior and the quality of the components used. This care extends to the backrest, which seems extremely solid and adjusted to the millimeter. Each panel aligned perfectly with our review sample. At this level, only the terrific built-in Cambridge Edge A comes close to the Michi X3’s level of build quality, and even then it costs hundreds more.

The X3’s main display is simple but large and clear enough to read from across our test room. On each side is a large rotary control. The left one toggles between inputs or menu options depending on the mode the amplifier is operating in. It would be nice if this command could also be pressed to confirm our choices rather than having to wait a few seconds before the choice is accepted. Of course, the remote control can be used for this function instead.

The dial on the right is used to adjust the volume and, like its partner on the left, it is precise and robust. We’re almost as positive on the remote handset. As befits this product, it’s a simple metal wand with a sensible button layout. The handset feels nice to hold, but if we’re picky we’d like the buttons to have more precise and solid movement. At the moment they emit a thin click which seems at odds with the quality of the rest of the packaging. That said, everything works quite well.

An amplifier at this level deserves a capable partner system. We field our usual Naim ND555/555 PS DR music streamer alongside the Technics SL-1000R turntable, which is fitted with the excellent Vertere Saber moving magnet cartridge to test the X3’s phono stage. The Naim streamer is also used as a digital source in partnership with Chord’s 2go/2yu pair and an Apple MacBook Pro laptop loaded with Audirvana music player software. The speakers are our long-running ATC SCM50s, but we also have the new Bowers & Wilkins 805D4 on hand. Rotel is distributed by Bowers & Wilkins, so we think pairing the X3 and 805 D4 is quite common. Finally, the headphones: we’ve got the Focal Stellia and Grado’s RS 1 to see how the Rotel fare in this regard.

To accuse a person of lacking character is a harsh assessment. For a piece of hi-fi though, it’s extremely positive. This Michi is a decidedly “hands-off” performer. It doesn’t imprint a strong sonic signature on anything it plays, letting the character of the sound come from the recording or some other part of the system. Tonally, this feels unbiased to us, offering all parts of the frequency range with equal importance.

Levels of detail are high, but it’s the crisp and precise way in which this amplifier renders that information that impresses. We listen to Stravinsky The Rite of Spring and there’s no denying the power and punch on offer. The X3 is a performer’s sledgehammer with music like this. Rarely do amplifiers of this level deliver such muscularity and manage to combine it with subtlety if the demands of the music change. It’s a hugely enjoyable presentation that combines calm and control brilliantly at almost any volume level. Push the Michi hard and it doesn’t creak, able to retain its refinement well beyond our normal listening levels.

Stereo imaging is good too. While the soundstage isn’t as spacious as some we’ve heard, this amplifier is still able to layer the orchestra convincingly and lock instruments into position no matter how complex the music. It is a stable and solid presentation, which inspires confidence.

One of the highlights is definitely the Michi’s bass delivery. We move on to Massive Attack Heligoland and are amazed by the X3’s low-frequency grip and ability to define low-frequency instrumental textures. Add to that plenty of punch and it makes most of the competition at this price a little soft and fuzzy in this region. The rhythmic dynamism of songs such as Aerial Atlas is communicated in a decent way, although if this aspect is a priority, there are better choices than this Rotel at this level.

Overall, however, the X3 remains a musically cohesive performer that can keep up with individual musical strands, but also allows the listener to sit back and enjoy the whole performance.

The phono stage continues the good news, retaining the energy and sparkle that makes the Vertere cartridge so likeable. The tonal character of the phono module is consistent with what we hear through the line stages and the levels of detail are also quite good. It is a relatively quiet circuit and able to work well with most price compatible turntable packages. We still wish it had moving coil compatibility.

The DAC module does not quite reach the same heights. Although it’s a perfectly decent performer, we find it sounds thinner and notably less expressive than the line stages. We think the overall performance is on par with a reasonably capable DAC solution in the £400/$500/AU$700 price tag. Given the quality of the phono stage and the rather greedy headphone amplifier (which has no trouble pushing our Focals and Grados to high levels), we were hoping for a little more.

Despite our high level of positivity for the Michi X3 as a complete package, we feel the need to remind you that this is still a discrete amplifier. He’s by no means a showy performer and that can make him seem a bit lacking in enthusiasm compared to some rivals.

There is no shortage of quality rivals at this level, of course. They’re as varied as Naim’s cheaper SuperNait 3, Copland’s classy hybrid CSA100 and Cambridge’s more expensive Edge A. the Copland offers greater finesse but loses pure muscle. The Cambridge Edge A may be the closest in build and capability, but despite having a more fluid and engaging presentation, the X3 still has the edge in clarity, sonic accuracy and price. .

So this is it. This Rotel is a terrific performer who is ready to mix it up with the best at the price. Add the exceptional construction and comprehensive specifications to the extremely capable sonic performance and it’s a must-have on your shortlist.

Read our review on Edge of Cambridge A

Best stereo amplifiers 2022: the best integrated amps for every budget

How an electric truck factory became a lightning rod in Georgia