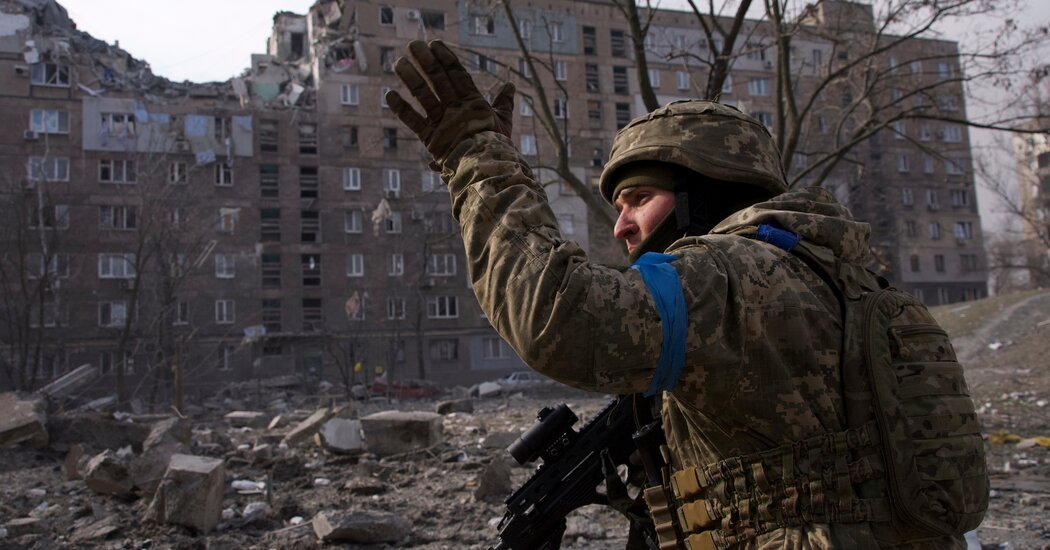 WASHINGTON — Russia asked China to provide military equipment and support for the war in Ukraine after President Vladimir V. Putin launched a full-scale invasion last month, according to US officials.

Russia has also asked China for additional economic aid, to help counter the blows its economy has suffered from broad sanctions imposed by the United States and European and Asian countries, according to an official.

U.S. officials, determined to keep secret their means of gathering intelligence on Russia’s demands, declined to further describe what kind of military weapons or aid Moscow is seeking. Officials also declined to discuss any reaction from China to the requests.

Chinese President Xi Jinping has strengthened his partnership with Mr Putin and supported him as Russia intensified its military campaign, destroying cities in Ukraine and killing hundreds or thousands of civilians. US officials are watching China closely to see if it will follow through on any requests for help from Russia. Jake Sullivan, the White House national security adviser, is scheduled to meet Yang Jiechi, a member of the Chinese Communist Party’s elite Politburo and director of the party’s Central Foreign Affairs Committee, in Rome on Monday.

Mr. Sullivan intends to warn Mr. Yang of any future Chinese effort to support Russia in its war or undermine Ukraine, the United States and its partners.

“We are communicating directly, privately to Beijing that there will absolutely be consequences for large-scale sanctions-busting efforts or support for Russia to fulfill them,” Sullivan said on CNN on Sunday.

“We will not allow this to continue and for there to be a lifeline for Russia from these economic sanctions from any country in the world,” he said.

Sullivan made no explicit mention of potential military support from China, but other US officials spoke about Russia’s request on condition of anonymity due to the sensitivity of diplomatic and intelligence issues. .

Liu Pengyu, spokesman for the Chinese Embassy in Washington, said he had never heard of Russia’s request. “The current situation in Ukraine is indeed disconcerting,” he said, adding that Beijing wanted to see a peaceful settlement. “The high priority now is to prevent the tense situation from escalating or even spiraling out of control.”

The Biden administration is seeking to lay out to China the consequences of its alignment with Russia and the sanctions it will face if it continues or increases its support. Some US officials say it may be possible to dissuade Beijing from increasing aid to Moscow. Chinese leaders may be content to offer rhetorical support to Moscow and not want to meddle further with Mr. Putin in providing military support for the war, according to these US officials.

Mr Sullivan said China “was aware before the invasion that Vladimir Putin was planning something”, but added that the Chinese may not have known the full extent of the Russian leader’s plans. “It’s very possible that Putin lied to them, the same way he lied to Europeans and others,” he said.

Mr. Xi has met Mr. Putin 38 times as national leaders, more than any other head of state, and the two share a desire to weaken American power.

Traditionally, China buys military hardware from Russia rather than the other way around. Russia has increased its arms sales to China in recent years. But China has advanced missile and drone capabilities that Russia could use in its campaign in Ukraine.

Although Russia launched a barrage of missiles on a military training ground in western Ukraine on Sunday that killed at least 35 people, there was evidence that Russian missile stockpiles were depleted. exhausted, according to independent analysts.

Last week, the White House slammed China for helping spread Kremlin disinformation about the United States and Ukraine. In recent days, Chinese diplomats, state media and government agencies have used a series of official social media platforms and accounts to amplify a conspiracy theory that the Pentagon funded biological and chemical weapons labs. in Ukraine. Right-wing political figures in the United States have also promoted the theory.

On Friday, Russia called a meeting of the United Nations Security Council to present its claims on the labs, and Chinese ambassador to the UN Zhang Jun backed his Russian counterpart.

“Now that Russia has made these false claims and China has apparently endorsed this propaganda, we should all be on the lookout for Russia possibly using chemical or biological weapons in Ukraine, or creating a false flag operation in them. using,” Jen Psaki, the White House press secretary, wrote on Twitter last Wednesday.

China is also involved in the Iranian nuclear negotiations, which have stalled due to new demands from Russia for relief from sanctions imposed by Western countries in response to the war in Ukraine.

US officials are trying to determine to what extent China would support Russia’s position in those talks. Before Russia raised the demands, officials in the affected countries were set to revert to an Obama-era version of the nuclear limits agreement that Donald J. Trump withdrew from, Mr. Sullivan could discuss Iran with Mr. Yang on Monday. .

Current and former US officials say the Rome meeting is significant given the lives at stake in the war in Ukraine and the possibility that Russia and China will present a geopolitical united front against the United States and its allies in the years to come.

“This meeting is critical and perhaps a defining moment in the relationship,” said Evan Medeiros, a professor at Georgetown University and senior director for Asia on the National Security Council during the Obama administration.

“I think what the United States is likely to do is lay out the costs and the consequences of China’s complicity and the possible activation of Russia’s invasion,” he said. . “I don’t think anyone in the administration has any illusions that the United States can drive China away from Russia.”

Some US officials are looking for ways to coerce Mr. Xi to distance himself from Mr. Putin on the war. Others see Mr. Xi as a lost cause and prefer to treat China and Russia as committed partners, hoping it could galvanize policies and coordination between Asian and European allies to contain them both.

Chinese officials have consistently expressed sympathy for Russia during the war in Ukraine by reiterating Putin’s criticism of NATO and blaming the United States for starting the conflict. They refrained from any mention of a Russian “war” or “invasion”, although they express general concern over the humanitarian crisis.

They mention support for ‘sovereignty and territorial integrity’, a common slogan in Chinese diplomacy, but do not explicitly say which nation they support – meaning the phrase could be interpreted as support for Ukraine or an endorsement of Mr. Putin’s claims to restore territory to Imperial Russia.

China and Russia issued a 5,000-word statement on February 4 saying their partnership had “no limits” when Mr Putin met Mr Xi ahead of the opening ceremony of the Winter Olympics in Beijing. . At that time, senior Chinese officials asked senior Russian officials not to invade Ukraine before the end of the Games, according to US and European officials citing a Western intelligence report.

William J. Burns, the director of the CIA, told a Senate hearing on Thursday that he thought Mr. Xi was “disturbed” by the war in Ukraine.

Last Tuesday, Mr. Xi say again China’s standard talking points on the war during a video call with the leaders of France and Germany. He also said all nations should exercise “maximum restraint” and that China was “deeply distressed by the outbreak of war again on the European continent”, according to a Chinese reading. He did not say that Russia started the fighting.

U.S. and European officials say big Chinese companies will most likely refrain from openly violating sanctions against Russia for fear of jeopardizing their global trade. On Thursday, some Russian news articles and commentaries questioned China’s commitment to Russia after news agencies reported that China refused to send aircraft parts for the country.

Russia, as US officials often remind the public, has relatively few friends or allies. And officials said Russia’s closeness to its partners is a sign of the difficulties it faces in trying to rein in Ukraine.

As the United States and Europe increased pressure and sanctions, Moscow asked for more help.

In the build-up to war, Russia secured assistance from Belarus, using its territory to launch part of the invasion. Minsk also tried to help Moscow evade sanctions. These actions prompted the European Union to impose sanctions on Belarus. The sanctions would limit the flow of money to Belarus from Europe and prevent some Belarusian banks from using the SWIFT financial messaging system.

Michael Carpenter, the US ambassador to the Organization for Security and Cooperation in Europe, accused Belarus of being a “co-aggressor” and of “stabbing your neighbor in the back”, referring to Ukraine.

President Aleksandr G. Lukashenko of Belarus has declared that his army will not join the war. But Russia launched missiles from Belarus and evacuated wounded Russian soldiers to hospitals there.

President Bashar al-Assad of Syria, who owes his government’s survival to Russian intervention in the Syrian civil war, has also declared his support for the invasion of Moscow. Russia tried to recruit Syrian fighters to join the war in Ukraine, according to the Pentagon.

While there are no details on how many recruits Moscow has drafted or whether they have arrived in Ukraine, US officials have said it is an indicator of the strategic and tactical issues that have plagued Russian commanders.

Before the war began, European officials said, Russian military contractors with combat experience in Syria and Libya secretly entered eastern Ukraine to help lay the groundwork for the invasion.