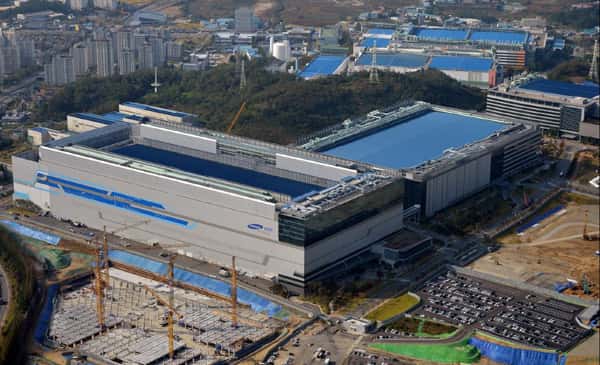 Amid all the concerns over Samsung’s chip processing technologies, the company has opened its largest chip manufacturing plant to date. The tech giant recently started production of the new P3 line at its Pyeongtaek campus in South Korea. The new production line has been operational since July this year, reports the Korea Times. Samsung manufactures state-of-the-art NAND flash chips in its facilities.

Samsung’s Pyeongtaek campus is a huge 2.9 million square meter hub in South Korea’s Gyeonggi-do province, about 70 kilometers south of the capital Seoul. It is home to more than 60,000 employees and is one of the company’s premier global semiconductor facilities. The company manufactures cutting-edge semiconductors here, including DRAM and V-NAND chips, as well as advanced sub-5nm logic solutions. US President Joe Biden started his three-day tour of South Korea in May this year at this Samsung factory.

The company is currently expanding its facilities by opening a new chip manufacturing unit, which happens to be the largest in the world. The P3 line uses extreme ultraviolet (EUV) lithography machines manufactured by the Dutch company ASML. Although it starts with memory chips, Samsung may also produce application processors and other semiconductors at this factory in the future.

Samsung has four other semiconductor centers in its home country, one in Giheung, Hwaseong, Onyang and Cheonan. It also operates three chip factories in China – in Suzhou, Tianjin and Xi’an – and one in the United States – in Austin, Texas. The company is building another chip factory in Austin, investing a whopping $17 billion.

Samsung is the largest memory chip supplier in the world. However, when it comes to smartphone processors, the company’s manufacturing technologies are demonstrably poor. It struggled to match the performance and yield rates of rival TSMC. This performance gap likely led Qualcomm to switch to TSMC for its next-gen Snapdragon processors. Samsung made its flagship Snapdragon 8 Gen 1 chipset last year.

But despite this crisis, Samsung continues to invest heavily in the semiconductor sector. The company is also concerned that the chip industry may experience a slowdown amid headwinds in the global economy, which has reduced consumer spending. However, he believes that continued investment and innovation is needed to stay afloat.

“I don’t see good momentum in the second half and over the next year, but we will try to turn this crisis into a good opportunity,” said Kyung Kye-hyun, CEO of Samsung’s chip division. “Less investment in a down cycle could lead to poor results in good times. Consistent investment is the right way to go.