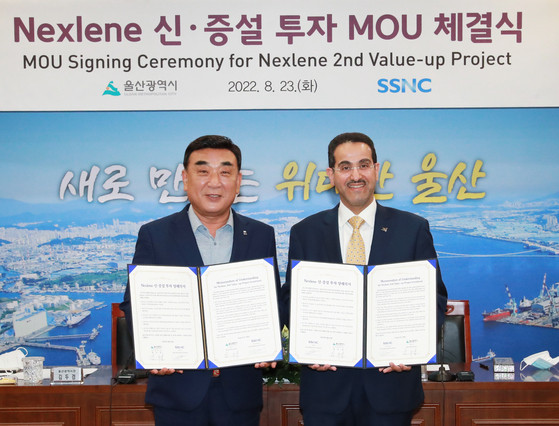 The latest investment of 200 billion won will be used to expand the production capacity of Korea Nexlene Company’s Ulsan plant to a 1,322 square meter (14,229 square foot) site. The manufacturing volume of Nexlene – a high-performance polyethylene first developed by SK geo centric – will be increased by 43% to 300,000 tons per year by July 2024, according to the company.

So far, SK geo centric and Sabic have invested a total of 605.1 billion won in Korean company Nexlene to build a 65,100 square meter production facility in Ulsan for Nexlene products, which are used in cars and solar panels.

More than 90% of Nexlene produced will be exported overseas, SK geo centric said.

The SSNC and the Ulsan Metropolitan City signed a memorandum of understanding at Ulsan City Hall on Tuesday, attended by Ulsan Mayor Kim Doo-kyum and SSNC Chairman Sami Mohammed Al-Osaimi.