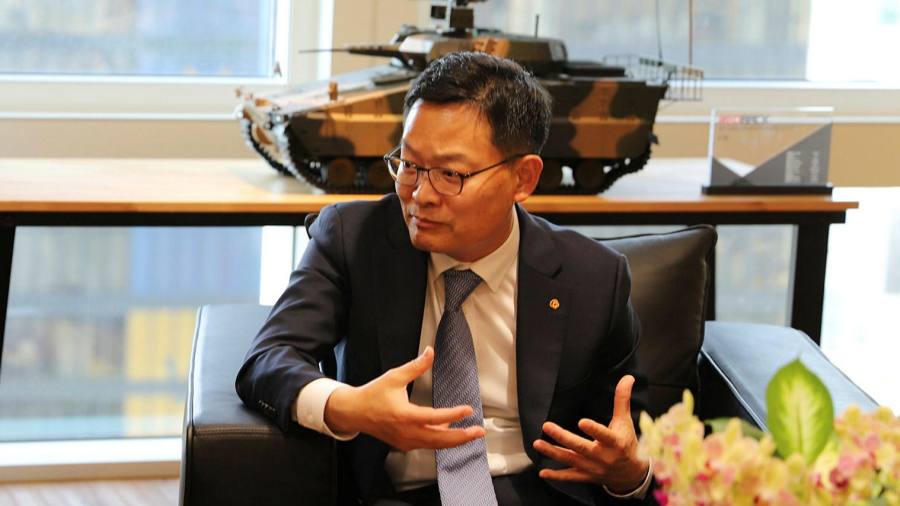 One of South Korea’s largest defense contractors is positioning itself as a major NATO supplier in response to ‘increase in demand’ as European countries increase wartime military spending in Ukraine.

Hanwha Defense, specializing in artillery systems and armored vehicles, entered the European defense market in 2014 after Russia’s annexation of Crimea with a license granted to a Polish contractor to build its self-propelled howitzer Krab.

Since then, the company has exported variants of its NATO-compatible K9 155mm self-propelled howitzer to Finland, Norway, Estonia and Turkey.

“We have been able to emerge as a very reliable partner, even though we are located at a distance [from Europe]Hanwha Defense managing director Son Jae-il said in an interview with the Financial Times at his company’s headquarters in Seoul.

EU countries have announced a total of more than 200 billion euros in defense spending increases since Russian President Vladimir Putin’s attack on Ukraine in February.

The EU’s European Defense Agency has identified the replenishment of stocks depleted by support for Ukraine and the replacement of obsolete Soviet-era equipment, mainly in eastern member states, as a critical imperative short term.

“By strengthening our global footprint, especially in Europe, our ultimate goal is to become a reliable partner for NATO itself by establishing many partnerships with local businesses in Europe,” Son said.

Diplomats in Seoul described “commercial diplomacy” as one of conservative President Yoon Suk-yeol’s priorities when he attended the recent NATO summit in Madrid, a first for a Korean leader.

Demand is particularly strong from ex-Warsaw Pact countries like Poland, which has a wish list of tanks, self-propelled guns and infantry fighting vehicles, according to a source familiar with the issue. situation.

A Western diplomat said the Krabs could not have been sent to Ukraine without the consent of the Korean government, describing the transfer as a “significant moment”. According to analysts and experts, Seoul has in the past been reluctant to antagonize Moscow or Beijing.

“Some countries are trying to strengthen their [own] defense industry,” Son said. “It will be a challenge for us, but the current increase in demand is also an opportunity for us.”

In February, South Korea and Egypt signed a $1.66 billion deal for Hanwha Defense to sell K9 howitzers to the Egyptian Armed Forces.

This followed a $3.5 billion deal in January between South Korea and the United Arab Emirates for Korean defense companies, including Hanwha, to export medium-range surface-to-air missiles to the state of Gulf.

He cited India as an example of a country where Hanwha was winning contracts despite the country’s longstanding ties with Russia.

“We are witnessing a move by the Indian government away from Russian armed capabilities and [away from] using their technologies, so we expect there will be more opportunities for us,” Son said.

In Europe, Son has identified the UK – where Hanwha hopes to join British companies such as Lockheed Martin in making a customized version of the K9 for the British military – as a target market.

Ramon Pacheco Pardo, a professor at King’s College London and chair of Korea at the Brussels School of Governance, said Seoul’s arms sales to countries that view Russia and China as security threats reflected an orientation emerging and more open pro-Western movement in Korean politics.

“Arms sales to Australia, but also to Southeast Asian countries including Indonesia, the Philippines, Thailand or Vietnam, have upset China – while arms sales to Estonia, Norway or Poland clearly have a Russian component,” said Pacheco Pardo. “But that didn’t stop Seoul from moving forward.”