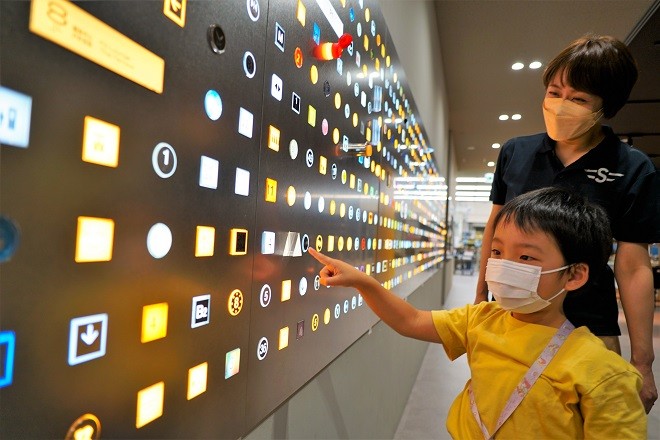 Video footage taken at Shimada Electric Manufacturing Co. in Tokyo’s Hachioji town shows children and other visitors pushing their hearts out at a wildly popular interactive display of elevator buttons designed or produced by the company. (Erina Ito)

As long as he can remember, 6-year-old Yoshiki Nishizawa has always loved pressing buttons.

Since he was about 3 years old, every time he saw an elevator panel, he would rush to be the first to press one.

Even at home, he added an illustration of buttons to a sliding door he can push to pretend it works like an elevator.

So when Nishizawa’s mother took him to an elevator button factory in Tokyo on August 10, and he looked up at a wall covered in hundreds of buttons – 1,048, to be exact. – he was simply amazed.

“Am I free to press all this?” he asked enthusiastically.

Some were marked with bizarre descriptions, such as the one that said “Never! press me. Another shows a star followed by the letter “G”. One was simply called “Bonus”.

Nishizawa and her mother had traveled from Chikuma, Nagano Prefecture, to visit the Shimada Electric Manufacturing Co. factory in Hachioji, west of Tokyo.

Company tours have recently become a big draw for kids and other button enthusiasts.

All available slots for the rest of the year are already full, company representatives said.

Among the popular attractions, the tour features a game to see how many buttons visitors can press in just 30 seconds.

Nishizawa played the game with a serious look on his face and smiled proudly when he was done, having expertly pressed 68 buttons.

Founded in 1933, Shimada provides, among other things, custom elevator buttons and lights.

The company’s products have been used in iconic locations across Japan, including Tokyo Metropolitan Government Buildings, Tokyo Midtown and Roppongi Hills, and Abeno Harukas in Osaka.

Shimada only started offering factory tours a few years ago, in 2018.

“We mainly deal with business-to-business transactions,” said Sachi Omori, the company’s public relations manager, explaining why his employer introduced the tours. “We wanted members of the public to know what we’re up to.”

“You only have to press one button when you take an elevator,” Omori said. “Here, on the other hand, you are free to squeeze as much as you want.”

Factory tours, which are offered on the 10, 20 and 30 days of the month that do not fall on holidays, are in such demand that booking slots book up within half an hour of opening, a- she declared.

The President’s Award went to whoever says, “You don’t make enough annual revenue to press that.”

Another new addition says “Pien”, a currently popular slang word that mimics the sound of crying and is often accompanied by a pleading face emoji.

There’s also one that reads “More calories to consume each time you press”, while another is shaped like the head of a mayonnaise bottle.

Ironically, the tour’s popularity comes at a bad time for Buttons.

Throughout the novel coronavirus pandemic, people have been more aware of disinfecting and sterilizing objects that are often touched.

Shimada officials said that in light of this, the company is currently working on developing touchless buttons.

Tour reservations can be made through the company’s website (https://www.shimada.cc/tour), which is in Japanese only. Time slots from January to March 2023 will be available for booking on December 1.