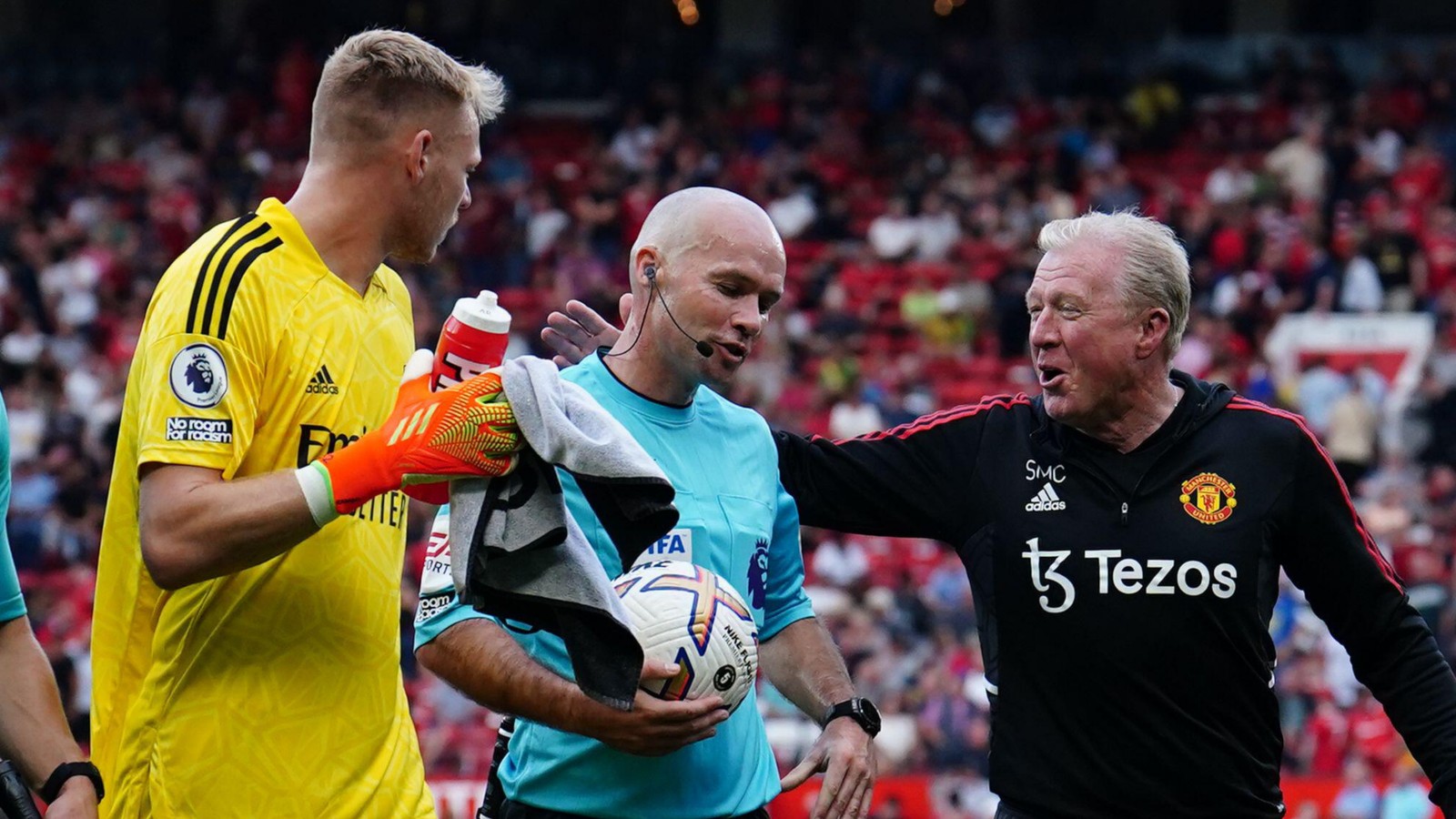 VAR was sold to us on a lie but don’t be the loser clinging to the sinking ship: we have to get rid of

After a terrible Premier League weekend for VAR, fans at every club must rid the game of a broken system that was sold to us on a complete lie.

What was the point of introducing VAR? Well, as you will remember, that was to correct glaring errors, right? It was to make things fairer.

He failed on both counts.

When it was sold to us, it was not imagined, much less expressed, that this technology would actually make mistakes, just as referees on the pitch always have. It was not specified that he would be subject to the same hazards of human fallibility as the referee on the ground, only transposed to Stockley Park.

No, we were sold a system that would work narrowly and specifically. But, of course, he hasn’t delivered the brave new world promised and is little more than a guy in a darkened room staring at a screen with line drawing software.

The parallels with Brexit are compelling. We went from a system that was certainly imperfect but which largely worked well for many years and gave us a lot of freedom, to a system that made everything more difficult, more frustrating, more constraining and just plain worse. The lawyers believed a lot of lies. Yes, it’s VAR.

And just like Brexit, those who wanted it introduced find it difficult, if not impossible, to admit they got it wrong. Instead, they rely on “it’s not implemented properly” to excuse all failures. But the way it’s implemented is the way it always will be. Remember when people said it would get better with use. Does he have? No, this is not the case. It is not possible.

Those who say “the VAR itself is not the problem”. It’s the morons who exploit it’ clearly bought into the idea that VAR would somehow operate independently of humans – the way Brexiteers bought lies written on a bus or thought that leaving the EU would stop people coming to the UK from Pakistan – and would be Human Error free. They bought into the idea that it was high-end computer technology, not some short-sighted guy with a headache.

Unless we raise super humans who can’t make mistakes, mistakes will always be made.

You’ll notice the ragged group of pro-VAR defenders has been whittled down to two basic arguments.

First of all, it made the game MORE exciting because you can celebrate a goal twice – once when it’s scored, then once more when VAR approves it.

The first is delusional. VAR completely ruined every goal because as soon as the ball goes into the net and everyone starts dancing, VAR hangs like a curse on the proceedings. Time and time again, the atmosphere sinks like a lead balloon and the players start hanging around for up to five minutes, like lost children, waiting for approval from above.

This joy when the goal is given, it’s not joy, it’s relief. All the joy of scoring the goal in the first place is now lost. This terrible feeling of cynicism when a goal is scored is entirely new, a product of VAR and goes against the very spirit of football. Whenever a goal is scored, the first thing you do is stare at the screen, hoping it doesn’t turn purple. It’s a kind of torment.

When West Ham scored their equalizer against Chelsea everyone went wild in traditional style and then VAR smashed it all in, ruling out the goal for a non-existent foul. This feeling of having scored only to have it scored a few minutes later is odious. It’s worse than never having scoredeven worse when the decision is simply wrong, as was the case at Stamford Bridge.

Before VAR, the decision was immediate, so you knew if the flag wasn’t up after the ball hit the net, it was a goal. Those days are long gone.

Is giving it all worth the few times it undoes a bad decision to give or disallow a goal? Of course not. So many decisions are subjective, most of us were perfectly used to accepting fringe calls no matter what direction. Those who haven’t are responsible for VAR. Their obsession with fixing everything has unleashed the monster.

When Conor Coady scored for Everton to take the lead against Liverpool his shoulder was ‘offside’ and the goal was ruled out. However, the offside rule was introduced to prevent players from gaining an advantage by being in front of the ball; Coady didn’t get any advantage as his shoulder was slightly ahead of the ball. If he had gone an inch further, he would still have scored. He was unmarked at the back post, for God’s sake. So while this was a “correct” decision, it was an unfair decision and not the reason the rule was invented.

VAR is supposed to make things fairer, but too often does the exact opposite. She gave us nothing and yet her existence took so much away from us. It introduced more frustration and anger while taking away the joy that we are all going to experience in football.

He was sold as the all-seeing eye that would punish rule breakers. But this is not the case. You can get away with a foul that leads to a goal as long as it leads to a goal a few phases later. But you can’t ungroup one game section from another in this simplistic way. Everything in a game is linked to everything else. If a goal is scored from a goal kick that should have been a corner kick, VAR cannot intervene. This very fact leads fans to feel cheated. Why are some things corrected incorrectly and many others not? It is incomprehensible to have a system supposed to correct errors whose operating parameters prevent it from doing so most of the time.

He can’t even overturn unfair yellow cards. But of course, if it covered everything, it would break the game so badly that it would be unbearable. The current situation is therefore a halfway house.

This brings us to the farce of “clear and obvious” errors.

VAR was only supposed to kick in for outright howlers – when they believe the referee has made a clear and obvious mistake. But that’s just plain wrong. This is not the case. How can I know? Because if it takes four minutes to decide whether an error has been made, it cannot, de facto, be clear or obvious. Things that are clear and obvious are clear and damn obvious, otherwise you don’t call them clear and obvious, do you?

Second, the referees, not being cyborgs, can’t see if a shoulder is offside by an inch and if you need freeze frame technology and draw lines on a screen to determine if that thumb is offside, that cannot de facto be a clear and manifest error either. This may technically be a mistake, but if you can’t see it with the naked eye, it’s impossible to be clear or obvious. This means that VAR should not be involved. But he is.

So “clear and obvious” is clearly and obviously absolute total bullshit. The whole reason VAR is based on is deception.

It’s important to remember that football was never meant to be judged so precisely and numerically. Its rules are analog. No one can point to what VAR has done that has made football more entertaining, more fun and more exciting, but we can all point out how much it has made it less entertaining, less fun and less exciting. So why do we have to put up with it?

We must all oppose it. Boo it at every chance like the fans did in Brighton as they waited and waited to get a decision on Alexis MacAllister’s brilliant and beautiful goal and another glorious moment of football was ruined as they sent him off, after four minutes, for an offense that was anything but plain and obvious unless you stopped and looked for a reason to disallow the goal. Football shouldn’t be governed in this stupid way.

Well done Var. One of the big goals ruled out for something no one even asked for. It’s a total mess as it has been since its inception

We have to make it clear that we hate VAR, whether it benefits our club in one case or not. Why should we accept a system which does not even do what it promised to do, which governs on false premises and in doing so has obviously made football worse in the same way it is outside of the single market and that it has no freedom of movement makes business and life manifestly worse?

It’s gotten so bad that the Premier League is consult the PGMOL on the implementation of VAR. They should tell them to hang it. They won’t, but they should. It spoils the Premier League product quite profoundly. The same will be true for the Scottish elite.

No one voted for Brexit to make the country worse off; nobody wanted VAR to break the joy of scoring goals. Both were sold on lies, but both things happened. Both must be put in the dustbin of history.

Everyone is wrong. It’s okay, but please don’t be the loser who clings to the sinking ship just so you don’t lose face.