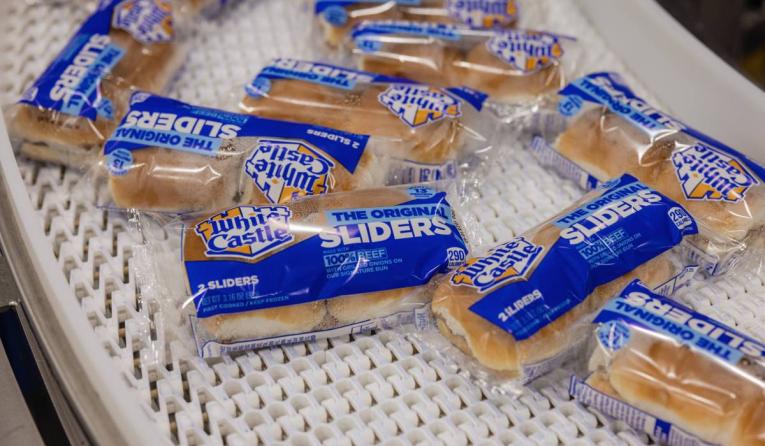 White Castle, a family business since 1921, held a groundbreaking ceremony Thursday for the recently completed expansion of its retail food manufacturing facility in Vandalia, Ohio, just outside of Dayton. The plant, named “The House That Bill Built” after former chairman and CEO Bill Ingram, supplies packaged frozen sliders to retailers large and small in all 50 states.

White Castle invested over $27 million in the expansion, which doubled the size of the facility from 75,000 square feet to approximately 150,000 square feet. The project, which lasted just over a year, will add 75 jobs to the current workforce of 160 once the new production lines are fully operational.

The town of Vandalia, JobsOhio, the Ohio Department of Development, Montgomery County and Dayton/Montgomery County Port Authority all played a role in the completion of the expansion project.

“We continue to see growing demand in all markets for our retail sliders,” says Dave Rife, White Castle Manufacturing Manager and fourth generation family member. “This expansion gives us the capacity we need to ensure grocery stores and outlets across the United States have the White Castle products they need to satisfy their customers’ cravings.”

White Castle broke ground on the project in July 2021 in a ceremony attended by members of the Ingram family as well as officials from Vandalia, the Dayton area and JobsOhio. White Castle executives dedicated the building to Bill Ingram, a third-generation family member who served as chairman from 1980 to 2015 and was responsible for establishing and expanding the retail division.

During Bill’s early years as President and CEO, he noticed more and more customers bringing Sliders home from White Castle restaurants and freezing them for future meals. In response, he suggested White Castle sell its famous sliders as frozen foods in grocery stores nationwide. Some industry experts scoffed at his idea, but true to his reputation as an innovator, Bill forged ahead. White Castle launched its retail division in 1987, becoming the first fast food restaurant to offer its dishes for purchase in grocery stores for preparation at home.

According to current President and CEO of White Castle, Bill’s daughter, Lisa Ingram, Bill wanted to make sure sliders were available to everyone, even people who didn’t live in a restaurant market. of White Castle. Naming the expanded manufacturing facility after him was a fitting way to honor the role he played in growing the family business.

Over the years, White Castle has invested heavily in the supply chain that powers both its restaurant and retail divisions. It owns and operates its own bakeries, meat processing plants and frozen food manufacturing plants. The strategy helps ensure that Sliders available at food retailers nationwide offer the same quality and taste as Sliders sold at Castles. White Castle’s retail product line includes the Original Slider, Cheese Sliders, Jalapeño Cheese Sliders and Chicken Breast Sliders.

The news and information presented in this release has not been corroborated by WTWH Media LLC.